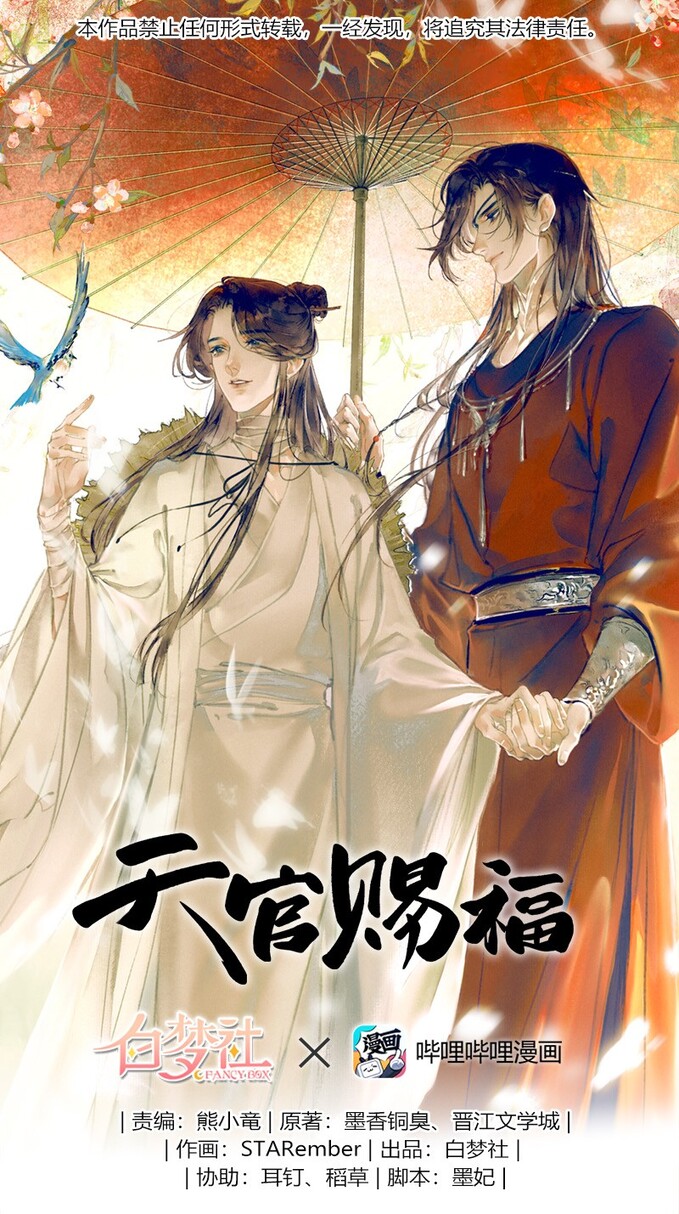 I was out asking my friends, Reddit and manhwa forums looking for great art with great plot. This had one too many mentions that I had to check it out. Well, here we are!

It’s about a crown prince Xie Lian of Xan Le kingdom who ascended as a god three times. He was demoted and was sent back to the mortal world twice within the last 800 years. On the third time he ascended as a god, his first task was to solve the case of missing brides. On the side, he humbly collects trash to build his poorly built temple. Yes, he’s already a god but he collects trash. How humbling is that? LOL. Then, he meets the Ghost King, Hua Cheng, who helped, befriended and followed him everywhere.

The manhua art. It’s just… OH. MY. GOD! STARember did a really great job. It’s like a painting (check out the raw version here). You’ll know what I mean. Manhua art tops the anime version wayyyy too much. I can’t shut up about this. I wish they used the same art in anime version.

The plot was complex. It was advertised as fantasy romance and quite frankly, romance was not the most important thing in this story. I’m not mad about it. There were so many things to unravel. I’m only 45 chapters in. There’s still a long way to go. The web novel has 200+ chapters.

If we’re talking about gods, the first thing that comes to mind would be a powerful being whose aim is to save and/or help people. While both of these things were true to Xie Lian, there’s also a twist.

How often do you read about a trash-collecting god who had a ruthless Ghost King for a secret admirer? This is a first for me, so yeah, it’s unique.

I’m not a native Mandarin speaker. The names are confusing (at least to me). It’s difficult to remember too many Chinese names for me. I probably should have listed down the characters in a notepad or something.

The anime gave me more details about the plot. I felt like the manhwa plot was too slow.

The pacing is too slow in manhwa. Maybe, because there were many plots ongoing at the same time that it was difficult to just cram them in one chapter.

This crown prince was no damsel-in-distress. He can defend himself and protect people at the same time. Sure, there were times where Hua Cheng comes to the rescue but it was not because he needed it. If he wanted something, he relies on himself.

People didn’t build him a temple. He made a temple out of a shabby house in the middle of nowhere. Being resourceful, he collected trash and unwanted goods to add to his temple.

He wanted to see who was the “Ghost Groom”, he asked the people and his asssistants to leave him and save themselves.

The captured people from the desert were about to be thrown in a pit, he jumped on the pit himself.

He didn’t need a savior. He needed a friend.

It must have been a lonely life of 800 years. Gods saw him as a joke. He went back and forth the mortal and gods’ realm. On top of that, even as a god, nobody prayed to him. Somebody give this man some love.

He explodes into thousands of silver butterflies.

They’re not lovers yet but who are we kidding? It’s only a matter of time. This man was smitten by Xie Lian. There’s not many things that we know about him in manhwa, yet. All I know was he admired Xie Lian from 800 years ago.

What were his motives towards Xie Lian? Where did they meet? How would his relationship affect Xie Lian’s life as a god?

What’s the hype all about?

First off, the author Mo Xiang Tong Xiu is famous. She’s widely known for her other web novel Grandmaster of Demonic Cultivation. It had a manhwa and live action.

Heaven Official’s Blessing is originally a web novel and is currently being adapted to manhua and donghua (Chinese anime).

Is it worth checking out?

If there’s anything that had to be on your BL holy grail, count this one in. This has so much to offer. Manhua art was drawn to perfection. God! I love STARember’s work! Plot was complex enough to keep me intrigued and thinking but not that complex that made me want to abandon the story.

Liked what you read?